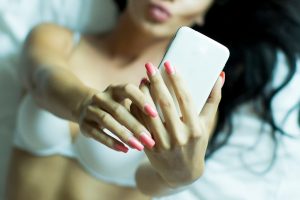 Teens love their cell phones so much that they are rarely without them. They connect with people all around the world, sharing personal insights, information, photos, and more. Caught up in the moment, they often make choices that aren’t smart and can have long lasting consequences. Teen sexting is one way in which an impulsive decision can changes their lives today and for years to come.

“Everyone sends sext messages.” Teens tell each other that it’s not a big deal but they’re wrong. Kids give in to peer pressure or participate because they think it’s funny. What they don’t see is that sexting can carry serious consequences.

Sexting is sending or receiving nude pictures or sexually explicit messages through a cell phone. Teenagers engage in sexting to prove an attraction or to prevent a breakup with their mate. Statistics show that 1 in 7 teens sends sext messages; 1 in 4 receives messages. It’s common for a person to receive a message containing a nude photo or sexual suggestion. If that happens, the child should report it to a parent immediately. The parent can do a reverse lookup on the phone number to report it to authorities.

Is it Worth it?

If we have learned anything about sexting, we know it’s fun but foolish and potentially dangerous. Politicians and celebrities are often in the news because of sexting. Some have experienced ruined careers and/or ruined relationships. They tell the media they were caught up in the moment or meant no harm. In the end, the fun was not worth the consequence.

The act is particularly dangerous for young people. Kids are often drawn into sexting with strangers; people who aren’t who they claim to be. The result may be dangerous or even fatal. Even the most diligent parents can’t be on alert 24/7. Educating children is vital to their safety. Parents should talk to their children about smartphone safety, the existence of sex offenders, and sending selfies to strangers.

Teens and politicians aren’t the only ones sending the messages:

Drexel University published a report stating as many as 50 percent of all teens engage in sexting before age 18.  The study also shows that most teens are unaware of the legal consequences of sexting. Parents must educate their kids on the risks and the following consequences:

Teens love Snapchat. They post pictures and know that they will be gone in a matter of seconds, so what’s the harm? Teens operate social media channels better than the tech savvy experts that created them. They have learned to save and store images, regardless of where they are posted. Servers store everything that is posted on the Internet. The images can come back to haunt your teen, preventing them from getting into a good school, landing a good job, or running for office. Messages sent via text can also be retrieved, even if the number is blocked on your iPhone.

People posting nude or compromising pictures that involve a minor are guilty of child pornography in many parts of the country. Sharing the pics also known as distribution of child pornography, is considered a felony, even if the minor has agreed. People receiving the photo can also be charged. Any of the people involved, even those underage, may also be considered to be a sex offender and would have to register with the sex offenders’ registry. A recent study showed that 61 percent of teens said if they had known the facts, they probably wouldn’t have sent the photos. As with the pictures and messages, criminal charges are forever.

Sextortion is a form of extortion or blackmail from someone using sexually related messages or photos against the sender. It can also be an attack against the person in the photo, even if it didn’t come from their smartphone or social media account. It’s most common among teens or couples that have recently ended a relationship, although there is a rise in incidents with tweens. It happens between friends who are fighting. Also referred to as “revenge porn,” sextortion can easily embarrass the persons joining in the conversation. It may cause animosity, embarrassment, or worse. Teens can be outcast, expelled or denied access into college. People put themselves at risk, including their future careers and relationships. People need to remember that once a photo or message is on the Internet, it is there forever. You can’t get it back.

Additionally, sexting carries legal issues. The person taking or sending the picture can face fines or even jail for distributing pornography, even if that person is a minor.

People use photographs in many ways. The teen loses control over the image once it is sent. The photo can be used to embarrass the teen, suggesting that he or she is an easy mark for sexual conquests, i.e. “slut shaming.” Teens manipulate photos to create memes, write mean comments, and more. “Frenemies” may blackmail the teen in the photo and, too embarrassed to tell, the teen will give into demands to retain privacy.

Sext messages are usually sent to one person, with the hope that the photo will remain private. There are no guarantees that will be the case. The recipient can show the photo to friends or post it online. Photos posted online are public domain and no one can control who will see them. A sexual predator can find the photo and, using public information, find the person in the photo.

First, you need to educate yourself about sexting, including the dangers and consequences.

To avoid the embarrassment and possible legal consequences from sexting, simply refuse. Do not take nude or compromising pictures. Do not engage in sexual conversations.

Lastly, avoid keeping inappropriate photos and videos on your computer. At the least, computers can be hacked, and private photos can be leaked to social media sites.

Parents must teach teens about responsible texting the social media use to protect them from the risks involved today and down the road.